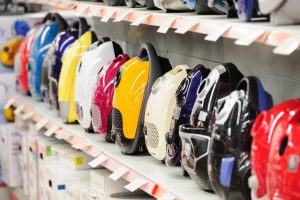 A Brief History of Vacuum Cleaners : The first person to patent a machine for cleaning was David Hess in the year 1860. Housewives all over America had turned to use rugs and carpets, a trait brought over by the waves of immigrants coming from Europe, to cover their bare wood floors and keep the dust and dirt to a minimum. When they were dirty, they had to be carried outside, suspended somehow in the air, and then beaten with a metal rod or heavy wooden stick.

A bit later someone invented a small, tennis racket-looking device

called a rug beater for precisely this purpose. Mr. Hess soon realized that there was probably an easier way to clean rugs without all the fuss and mess and he invented the Carpet Sweeper which had a rotating brush combined with a bellows system that created suction. His amazing invention also used two water chambers to trap the dust and fine dirt. The only problem with Mr. Hess’s machine is that there is no proof it was ever produced.

After Mr. Hess’ invention, there came a period of wilder and weirder inventions

that sought to accomplish the same thing. In the late 1870’s, Melville Bissell (sound familiar?) marketed a carpet sweeper that picked up the dirt and dropped it into a pan behind the rotating brush, adds Vin Faugeres . In 1899, John Thurman invented a gasoline-powered vacuum cleaner that is credited as being the first motorized version. Hubert Booth of London invented the electric vacuum in 1901, a device so large that it was parked outside the house and a 100-foot long hose snaked its way inside and did the dirty work.

The device was so popular that housewives all over London

held vacuum parties to enjoy the event. It wasn’t until 1908 when James Spangler, a janitor in Ohio, invented the first portable, suction cleaner — the precursor to today’s high-tech machines. He sold his patent to his cousin’s husband, William Hoover (also familiar?) and the rest, as they say is history.

This post A Brief History of Vacuum Cleaners has been kindly provided by Idaho Falls carpet cleaning .